Wearability Wednesday is an occasional feature on this blog, in which I re-visit something I’ve knit in the past and discuss it from a wearability standpoint.  Do I still wear it?  Why?  Or why not?  Has it held up to time?  How do I style it?  Today’s post goes back to a pullover which I knit eight years ago, in the spring of 2006.  Unfortunately,  I can only find one photograph of it from that time, so please ignore the bewildered expression on my face and the washed-out colours (this was before we moved to a digital camera, so we were unable to take 40 photos to get one good shot): 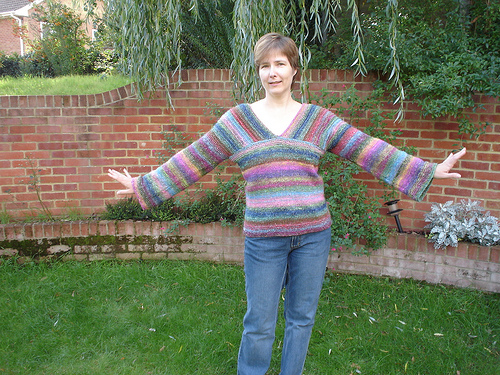 This is the Klaralund sweater, designed by Cornelia Tuttle Hamilton for Noro. It is knit in Noro Silk Garden.  The above photo was taken in October of 2006, shortly after we moved to England.  Here I am wearing it, eight years later and twenty pounds (egads!) heavier: 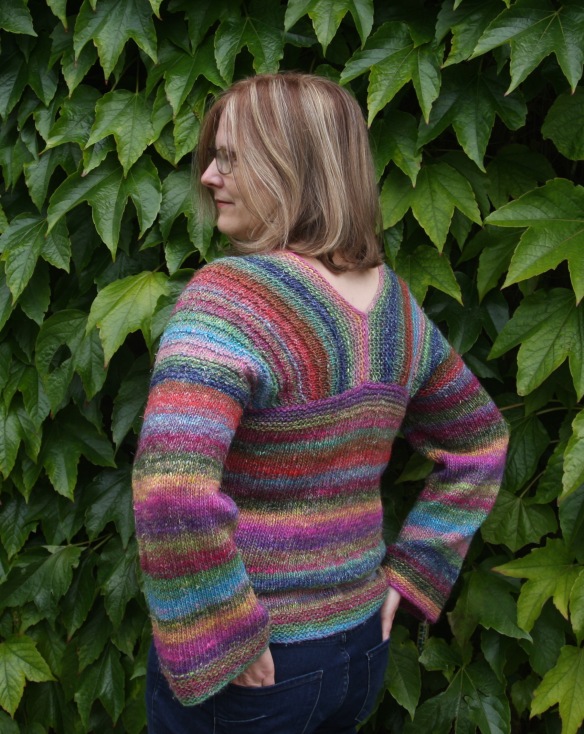 I have documented elsewhere on this blog my troubles with a repetitive stress injury (deQuervaine’s tenosynovitis) that led to me being unable to knit for more than a decade.  This was the second sweater I made after I was able to take up knitting again.  I wore this sweater to death!  For the first few years after I knit it, it was the go-to item in my wardrobe.  Jeans, check!  Klaralund, check!  Ready to go.  Why did I wear it so much?  I liked to wear hand-knit sweaters and I had very few to choose from at the time.  I loved the colours.  It was easy, un-fussy, but pretty.

At some point, however, I stopped wearing it.  Until Doug took these photos a few weeks ago, I hadn’t had it on in years.  Why did I stop wearing it?  First of all, I think I had worn it so often that I had become bored with it.  Second, as the years went on and I knit more and more, I had a growing pile of hand knits to wear, so it had some competition.  More importantly, however:  this sweater is shapeless.  It is four rectangles sewn together.  There is no shaping whatsoever.  The combination of dropped shoulders and no waist shaping means that it is baggy and shapeless. 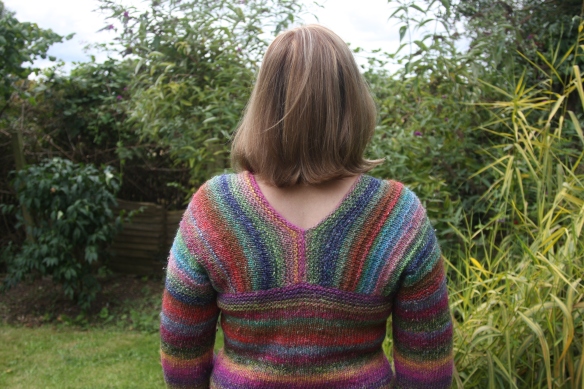 There is nothing particularly wrong with shapeless sweaters.  In fact, over-sized sweaters without waist shaping and with dropped shoulders are right in style now.  The past few years, however, has had me knitting a succession of shapely, curvy sweaters for me and the girls (for example, Livvy for me, Venetian Audrey for Emma and Peloponnese for Leah).  Compared with them, my Klaralund felt sloppy.  Another reason may also have to do with ego – it is nice to wear a hand knit sweater that shows off your expertise.  Klaralund can be made by a total beginner.

Now that I’ve put it back on though, I think I might resurrect it.  It is still comfortable and easy.  The colours are still bright and interesting.  It has even held its shape (in a shapeless kind of way).  I can still fit into it, despite the extra weight!  Furthermore, it brought back a bit of nostalgia.  I knit this before Ravelry existed.  When I was considering making this sweater, I put ‘Klaralund’ into a search engine and discovered that other knitters were doing the same – this was how I discovered knitting blogs for the first time.  For me, this sweater marks the beginning of the internet in my knitting life.  Who could have guessed that the internet would have so totally changed the knitting community and the way I think about knitting?

So, perhaps the next time I go walk by the river on a windy day or sip my morning coffee in the back garden, I may just pull Klaralund out of the closet. 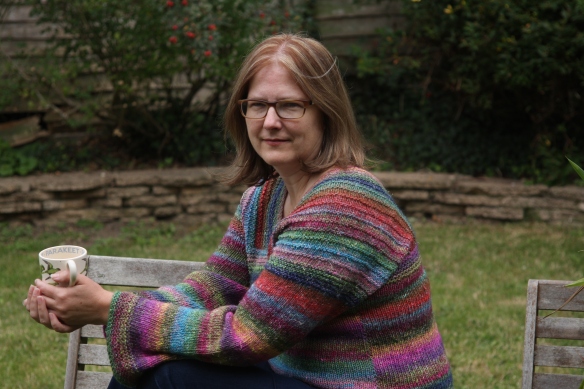 Kelly Sloan and Knitigating Circumstances, 2011-2021. Unauthorized use and/or duplication of this material without express and written permission from this site’s author and owner is strictly prohibited. Excerpts and links may be used, provided that full and clear credit is given to Kelly Sloan and Knitigating Circumstances with appropriate and specific direction to the original content.