Today, I had the pleasure of attending a class on 3D knitting with Olga Buraya-Kefelian. It was a real treat for me – a day of creative indulgence in London.  It was a small class – the best kind – at Loop, a lovely yarn shop in Islington.  I have long been an admirer of Olga’s designs – they are very architectural and striking, and show a real love of high fashion and of knitting technique.

Below is a photo of Olga, holding the Boko-Boko cowl.  It is knit with a strand of wool held together with a strand of silk-wrapped steel.  It gets its 3D structure from the way it is knitted, with the fabric manipulated by knits and purls and lace techniques, but the steel gives it just a touch of “oomph” which lends some integrity to the stitch pattern.

It is hard to describe the fabric, which is both incredibly stretchy, bouncy and resilient, and also formed into these fantastic dimensional shapes.  Olga said it reminded her of mountains and craters.  Of course, one must try it on: 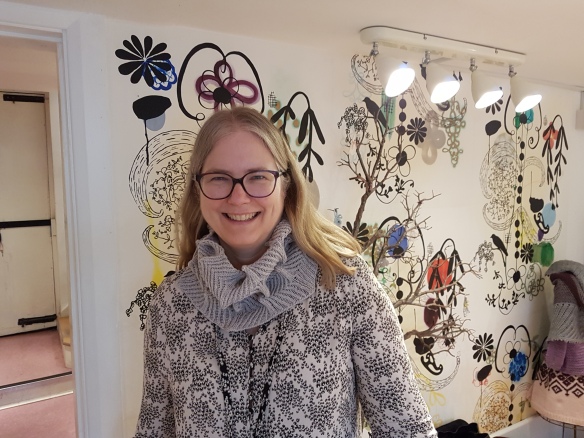 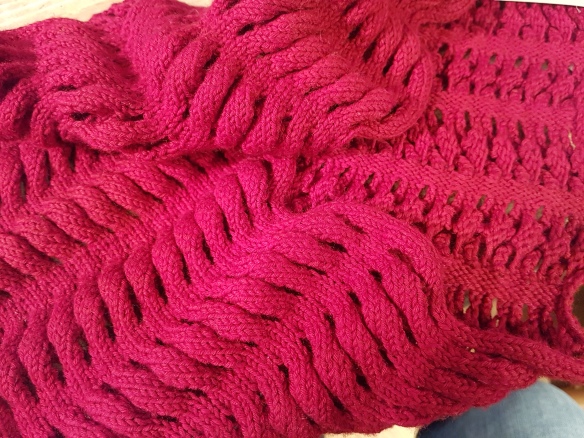 One cannot have a knitting class without doing some knitting, so I spent some time working on a swatch using the stitch pattern from the Moko Moko cowl.  Here it is while I am on the first row of curls:

And here it is while I was on the second set of curls, headed back in the opposite direction:

Olga has other patterns in which she has managed to knit fabric which naturally pleats. She says it is based on her love of Issey Miyake’s work (which is both glorious and out of the price range of us mere mortals).  Below is a cowl (Miura cowl) worked just in knits and purls which makes a very elegant pleated fabric.  The architecture of the fabric is such that I was able to arrange it as a sculpture on the table for this photo for artistic effect, but rest assured it looks just as fabulous around one’s neck.

Here is a swatch of another 3D stitch pattern from the many that Olga showed us:

There were some new stitch patterns, as well, that Olga has been experimenting with and which I promised not to show you as the patterns are not yet released.  One of them was so amazing it nearly caused palpitations among the group, who will clearly wait with bated breath to see what Olga does with it.

When I went into the class, I knew that I was going to make a Boko Boko cowl, but now I want to make all of the cowls. I want to make everything! I can’t tell you how much fun the Moko Moko sample was to knit, and how intuitive and easy it is once you’ve started. (You will not be surprised to learn that I bought yarn after the class.  I will wait for another post to show you my treasures.)

I enjoyed the class so much.  There were eight students.  Here is a photo of us (this was the only place we could fit and the lighting was not the best for a photo):

Thank you, ladies! I had such a good time knitting with you! (I always meet the best people at Loop.) Two of the women in the class were wearing hand-knitted garments designed by Olga.  I was lucky to cajole them into a photo for you.

On the left is Fiona, wearing a fantastic flowy Sakasama, knit in silk.  This garment can be worn in two ways (its hard to describe but the other way is upside down so that the collar becomes the hem).  You can’t really tell from the photo just how fantastic the drape of this garment is, or the shine of the silk, but the fact that Fiona has knit four of them (yes, four!) should give you some idea.  On the right is May, wearing her Apex in a brilliant red.  I believe May said that this was only the second sweater she had ever knit! This is pretty astonishing.  I forgot to ask May the details of the yarn she used, but she has just started blogging and you can find her Apex post here.

I wrote on the blog once of a bad experience with a knitting class, in which a designer who I had admired greatly really disappointed me.  This was certainly not the case with Olga.  She is charming and sweet, passionate about her craft, unassuming, a good teacher, and inspiring.  She patiently answered many questions, and talked to us about her creative process and about her many designing influences and experiences. She said to us: “I want to challenge you and make you so brave!” I left the class feeling challenged and inspired. (And a little bit brave as well.)