All of my knitting projects lately have seemed endless.  I keep picking time-consuming projects, and this is exacerbated by my new schedule which means I have much less time in which to knit.  The result has been that I occasionally feel as if knitting is a slog – not the desired outcome for a pleasurable pasttime.  I was in need of instant gratification; hence, the quickie.

I also have two daughters at university, which means little disposable income.  So, I did a search through my stash yarn.  I found two and a bit skeins of Rowan Cocoon, a chunky wool in a soft grey, no doubt left over from when I knit an Owl Sweater for Leah (which will be the subject soon of a Wearability Wednesday post).  I didn’t feel the need to search for a pattern and just grabbed a set of needles and improvised a pattern for a cowl. 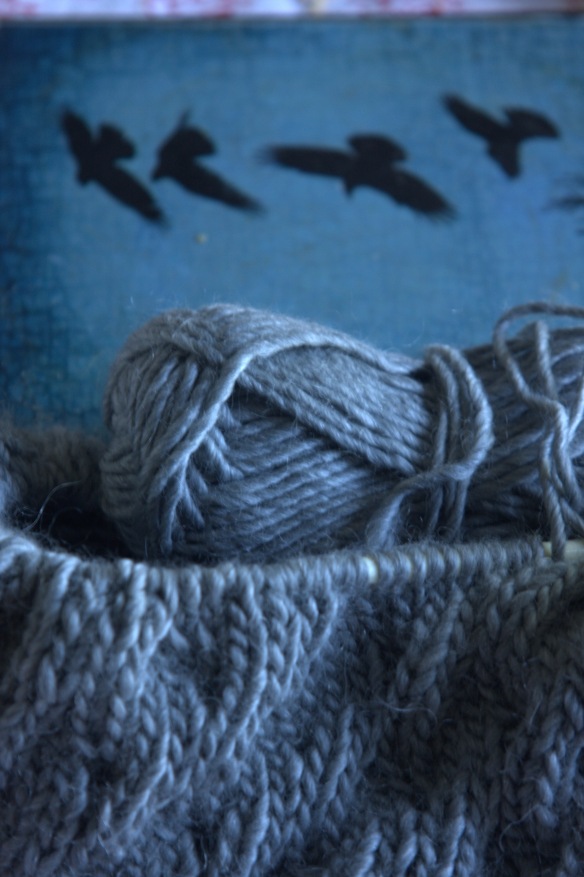 I used a US 10.5 needle and cast on 272 stitches, joined in the round, placed a stitch marker to mark beginning of round, and then knit in a 1×1 rib reversible cable stitch:

This made a thick, lovely, wavy fabric: 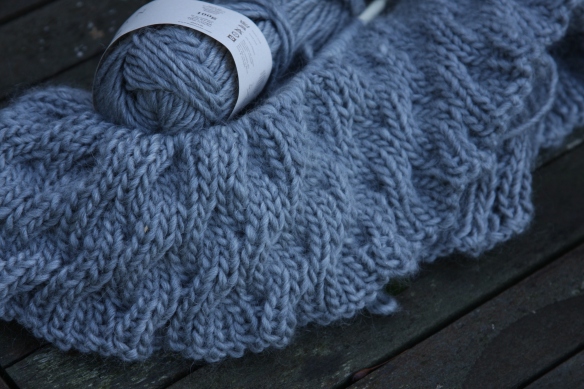 Blocking it, however, really pulled out the fabric quite a bit, revealing the cables (and adding quite a bit of length).  The unblocked measurement was 22″x5.5″ (for a 44″ circumference) and the blocked measurement was 28″x6″ (for a 56″ circumference).  I sort of like the look of the fabric better pre-block, but the truth of the matter was that it was too thick and bulky to look right as a cowl and didn’t easily double up around the neck.  Here is the finished cowl: 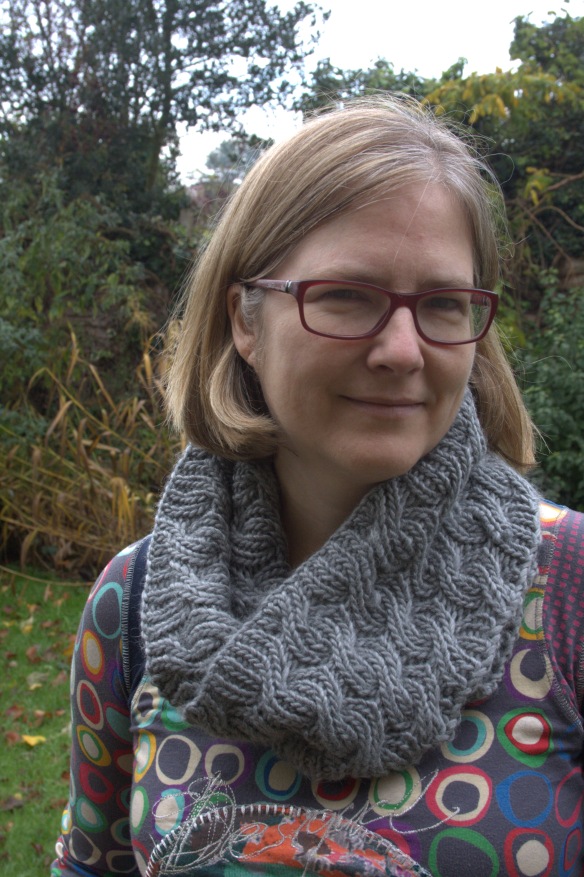 These photos were taken in a 5-minute window between rain showers, so are not the best, but you can see from the above one that the pattern is truly reversible so that the back and front sides are the same. 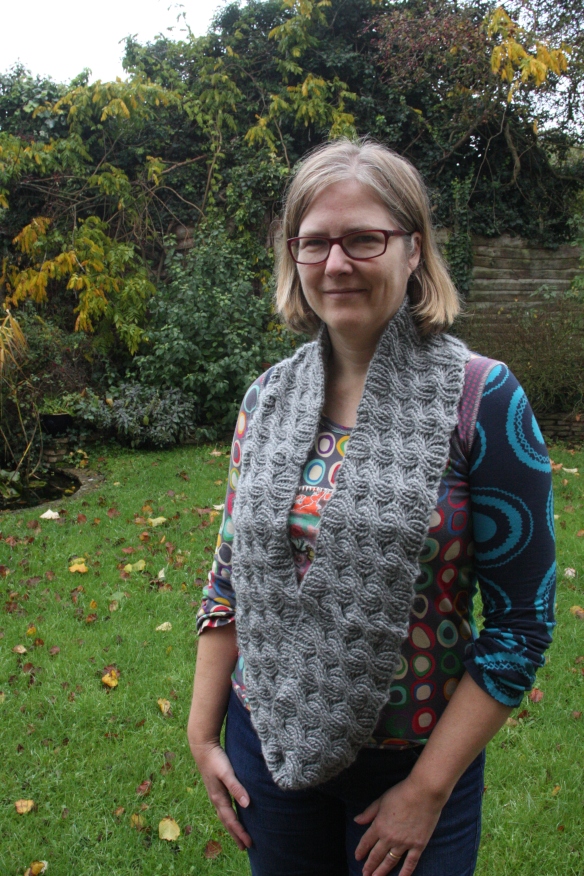 Alas, one quickie was apparently not enough to assuage the instant gratification urge, so I dove back into my stash yarn pile, and came up with a skein of Noro Kureyon.  I decided to knit the Campout Fingerless Mitts pattern by tante ehm, which is available for free.  Here is the finished pair of mitts: 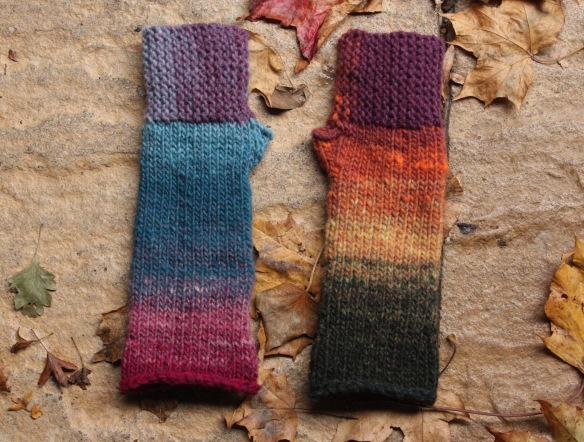 I decided that I wanted to be clever and use up every last bit of yarn from the skein, so I knit the two mitts at the same time (more or less) pulling the yarn from one end of the skein for one mitt, and from the other end for the second.  First, I cast on and started knitting the first mitt using the end from inside the skein: 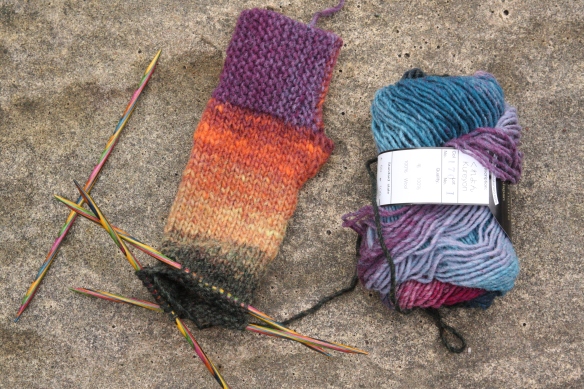 Then, I put the stitches on holders: 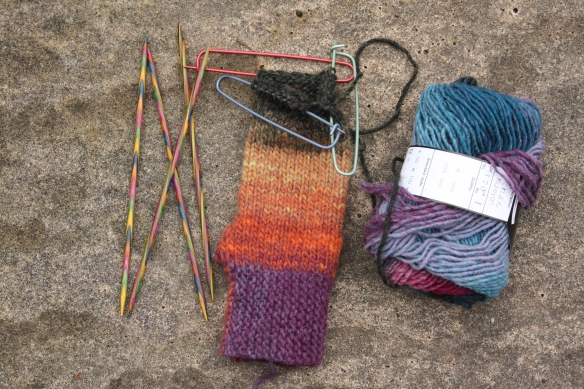 Then I cast on the second mitt using the end from the outside of the skein: 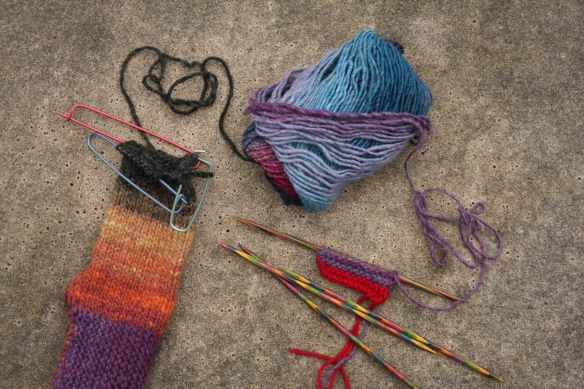 (Ignore the red yarn which was used as a provisional cast-on.  The mitts are constructed by starting with the garter stitch band around the top, grafting the two ends together and then picking up stitches and knitting down in stockinette stitch.  If I knit these again, I wouldn’t bother with the provisional cast-on and grafting; I would just sew the two ends together.)  I then continued to knit the second mitt, pulling the yarn from the outside of the skein:

The whole point of this exercise was to make the mitts as long as possible without needing to break the yarn, or wasting any yarn.  I needn’t have bothered: towards the end of the second mitt, I encountered a knot in the yarn: 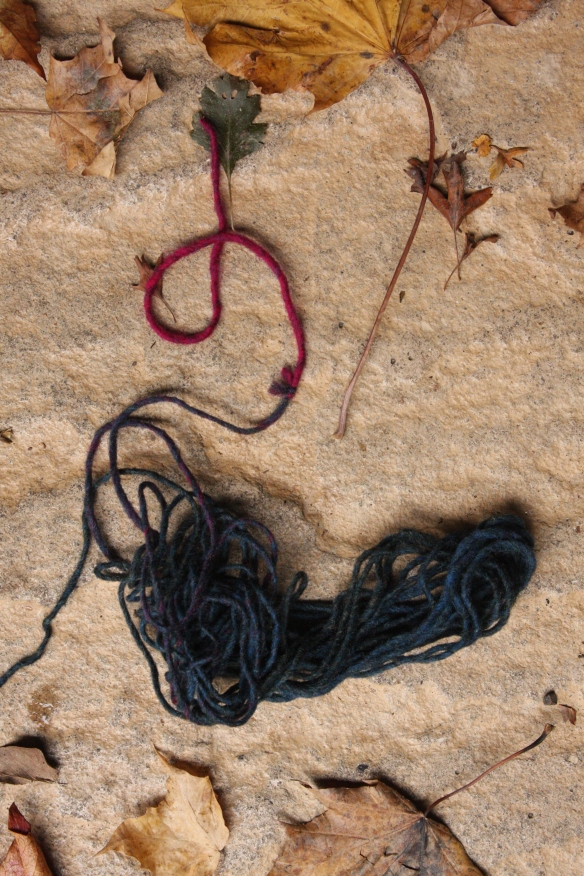 I decided to stop the second mitt just before the knot, and thus had to end the first mitt at the same length; without the knot, both mitts would have ended with this dark blue colour around the end.  As an aside, there seem to be two types of approaches to knitting with Noro.  The first approach always tries to make the colour changes match, so that both mitts would have the same colour progression, or both sleeves on a pullover, etc.  This involves buying more Noro than you need, and cutting out the bits you don’t want and coordinating the colour runs across the garment.  The second is to let the colours be and just knit.  This is the approach I prefer, and leads to mitts that don’t match.  I kind of like them that way. 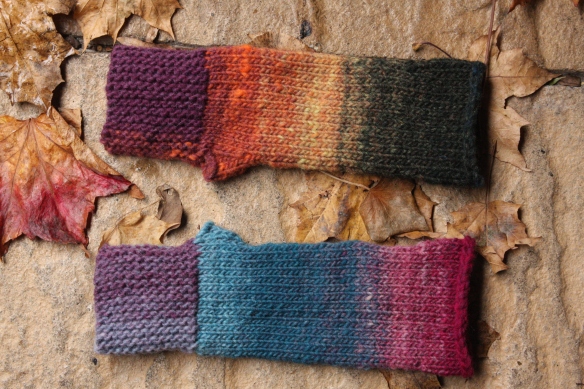 Now that I’ve got this out of my system, I hope to go back to my longer projects with more enthusiasm.  I’m heading off to Cornwall for a few days holiday.  Given the grey and rainy weather, there should be plenty of time to knit.