I recently finished the cashmere shawl which began as travel knitting for my holiday to Canada in May. 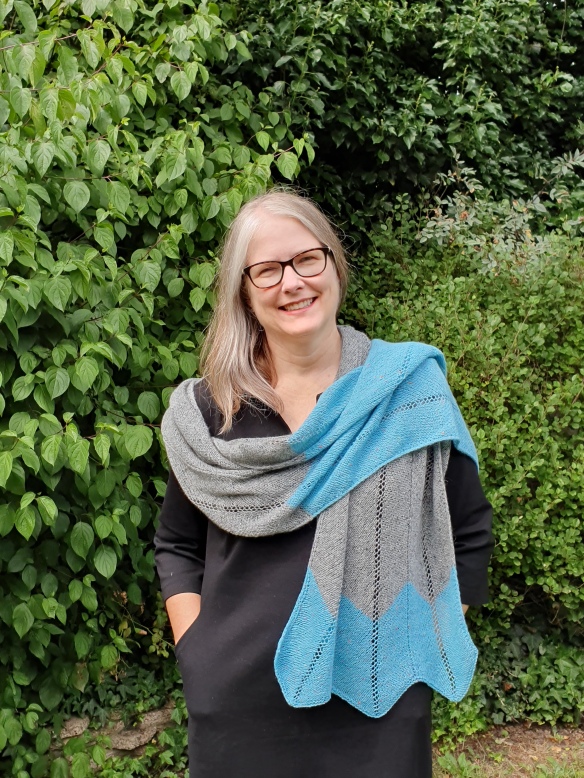 The pattern is the Tadami Cashmere Scarf by Ito Yarn & Design.  It is made with 5 balls of Ito Karei, an incredibly soft, 100% cashmere yarn, which has some tweedy nubs in it.  I have used two balls of the Turquoise and three of the Light Gray.  The yarn is woolen spun, and blooms beautifully when washed.

The pattern is incredibly simple; with the exception of the first and last three rows, every row, front and back, is exactly the same.  This is why I picked it as a travel knitting project (along with the fact that the yarn weighs practically nothing and the whole project can easily fit in a small handbag).

The rows of eyelets give it a pretty, lacy structure, and highlight the delicate nature of the yarn.  Except for one incident on the Nanaimo ferry when I had to rip out a good 6 inches or so due to accidently shifting the eyelets by one stitch, this was a very uneventful knit.  I knit half of it while on holiday, in beautful places like this (the porch of my friend Jill’s home on Lilloet Lake):

The rest of it was knitted back home in England.  It is pretty mindless knitting which menas it is ideal for knitting while holding a conversation, sitting in a meeting, or even touring around a National Trust property (here I am knitting it at Clivedon):

Despite the fact that it is very, very long, it never got to that point where it felt endless and I wanted to throw it across the room.  In fact, the whole thing took less than three months start to finish, only about half of which time I was actively knitting it.

I am a bit concerned that the turquoise does not really suit me.  However, once it is washed and blocked, the Ito Karei is so lovely it is hard to resist, so I might change my mind about that.  (I was hunting for the scarf today so that I could get some photos taken of it, and discovered Doug wearing it.  I may have to knit him a scarf with this yarn!)

Mine is the first finished Tadami project on Ravelry (and only the second project altogher) and I suspect it is because of the awful photo of the project on the pattern page.  If that photo was the only thing I had to go on, I would have never begun this shawl.  I think the problem is that it is sold as a scarf pattern when it is really a shawl pattern.  The fabric is so light and airy it deserves to be worn in a way which shows it off. Luckily for me, I bought the printed pattern at Loop in London, which has a far better photo of the finished piece, so I was tempted to try it.

The weather is awful here in the UK this weekend, with floods and power shortages, gale force winds and fallen trees.  This means that it is an excellent time for knitting!  I hope that you find the silver lining in the clouds this weekend.