A few days ago, I started a new pullover.  I am using Shibui Linen in the gorgeous colour, Bordeaux. 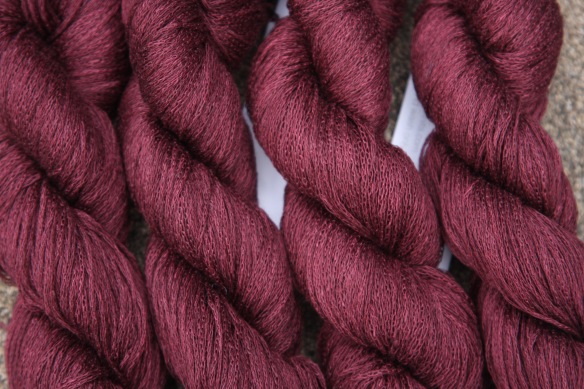 Before beginning, I diligently knit a gauge swatch.  I washed it, towel dried it, patted it into place, and let it dry.  I carefully measured it both before and after washing.  I measured it many times; seriously, you would think I was crazy with the number of times I measured it.

I then cast on for the pullover which is knit in the round, bottom-up.  While I was knitting, I took the time to measure the gauge occasionally to make sure that I was still on target.  I had knit the swatch back and forth and the garment was knit in the round.  I am aware that gauges can frequently vary when knit in the round (presumably due to the lack of purling every other row) and wanted to keep an eye on this.   I took measurements over four inches any number of times, and I was consistently hitting the pattern gauge (and my swatch gauge) of 25.  But soon, I began to feel that something was wrong.  I transferred all of the stitches  to a very long needle so that I could try on the garment and take a more accurate gauge.  This is what happened:

This is not caused by a slight difference in gauge.  What is the problem here?  I am knitting this as a test knit, so maybe the pattern numbers are wrong?  No, I have done the math (as has the designer, who is quite accomplished.)   I think it has something to do with the yarn, which is 100% linen and has a chain construction, combined perhaps with my knitting style (I am a “thrower”) and perhaps with a hundred other unaccounted-for variables. (Another test knitter, using the same yarn commented that “my piece is growing in width just by looking at it”!  However, other testers seem to be doing just fine with this yarn.  Clearly knitting is both art and science, with some mystery thrown in for good measure.)

I’m not giving up; I think both yarn and pullover will be great.  I just have to go back to the drawing board – this time I will trust my gut instead of the swatch.

Yesterday, when I tried it on, I was astonished and annoyed.  How can the yarn DO that?  Today, however, looking at these photos, I must admit to finding it pretty funny.  There are two morals to this story.  Moral number one: you are never so expert a knitter that you can’t make spectacular screw-ups.  Moral number two:  the gauge swatch lies!