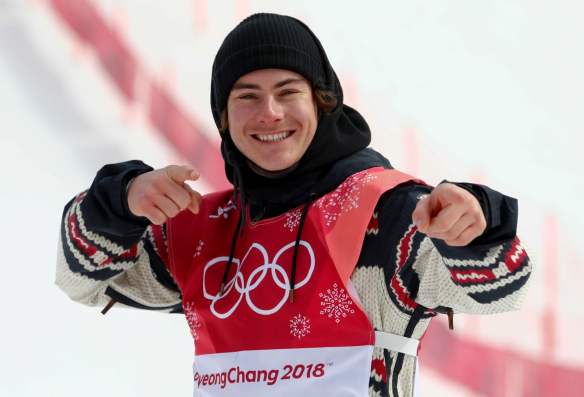 A little research on the internet reveals that the coats were made by Burton, who provided the Canadian snowboarding uniforms.  This article, from Snowboard Canada’s site, says:

“There are four different symbols that make up this uniform: the raven, bear, orca, sun and moon. One is on each jacket. The jackets are replicas of sweaters that were hand-knit by Granted Sweater Company based in Richmond, British Colombia. The artwork on the sweaters was designed by Corrine Hunt, who was born in Alert Bay, British Columbia and hails from the same village as Spencer O’Brien. Corrine has been creating contemporary art that reflects the themes and traditions of her First Nations Komoyue and Tlingit heritage for more than 24 years. She also co-designed the 2010 Vancouver Olympic and Paralympic gold, silver and bronze medals.”

Here is a photo, from the same article, of Corrine Hunt with some of the collection: 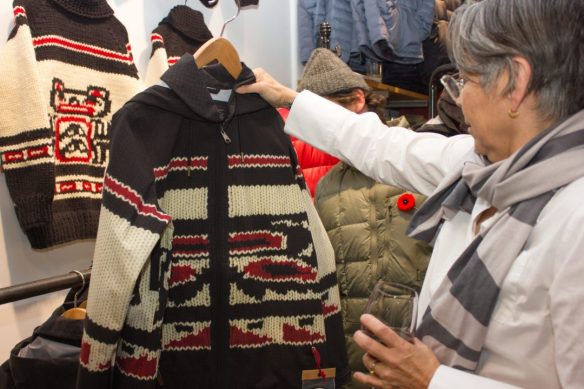 I love these jackets!  You can actually see each stitch from the original sweaters.

“Once the designs were complete, Burton used a unique digital printing process and transferred the artwork directly onto the jacket’s technical, stretch 3L fabric. They used a high resolution photograph of each of the sweater panels and created an stunning replica of the hand-knit sweaters. You can actually see the wool fibres on the jackets’ print.”

Click on the link to the Snowboard Canada site to see lots more photos of these fantastic coats and some discussion from the designer, Corrine Hunt.

Now that we’ve admired the coats, OMG! Look at that jump!: