It is sadly true that ordering yarn over the internet, based on how it looks on your computer screen, is a gamble.  Sometimes you win, sometimes you lose.  Having just finished up two sweaters (the adorable baby sweater blogged here and the beautiful cardigan for Leah which I will highlight next weekend), I needed to cast-on a new project. I have wanted to  try Sparrow, the 100% linen yarn from Quince & Co. for quite some time. I have also been enjoying the linen tee shirt Sel Gris by Claudia Eisenkolb which I knit last August, and I have had my eye on another linen tee from her linen collection, Pimenton. Here is the pattern photo of Pimenton, which uses three colours of Sparrow linen:

I believed this would be a quick knit and would produce a comfortable linen top which could be dressed up or down and thrown in the dryer to boot.  I spent a very long time looking at the available shades of Sparrow on my laptop, and ended up ordering Citron for the main colour and Maize and Pink Grapefruit for the contrast colours.  In my head, I was envisioning a zesty lime green, a vibrant yellow and a orange-y shade of pink.  What I got was very muted, pastel-y, desert tones, with a very pink “pink grapefruit” (you think I could have guessed from the name), a soft buttery yellow and a barely distinguishable (from the yellow) slightly green-tinged yellow.

Being someone who could live with denial (and having nothing else to knit at the time) I cast-on in the somewhat misguided belief that they would somehow transform themselves on the needle.  The pink continued to be pink: 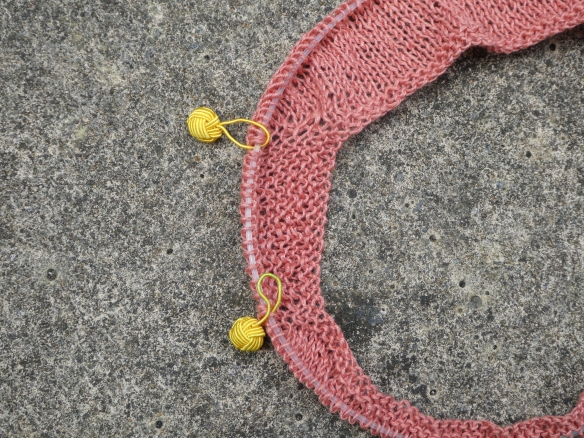 Adding the yellow did not help: 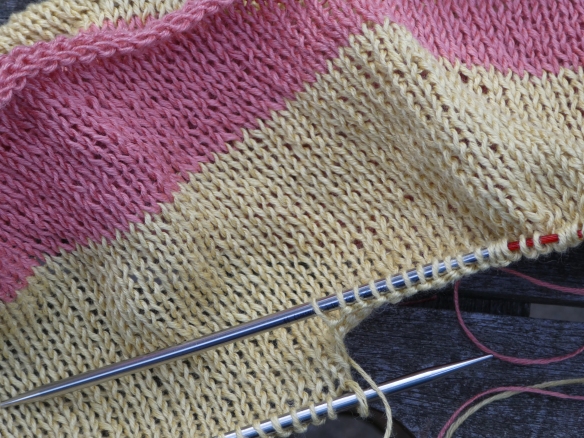 Here you can see it alongside the swatch, which I knit in the green, which is supposed to form the body of the pullover.

(These photos are proof of the inexact and fickle nature of colours on screen – none of these photos captures the shades properly; the yellow is closest in the middle photo, the pink in the last photo, and the green is actually much more muted and yellow-y than shown above).  This seriously wasn’t doing anything for me, though I continued to press ahead, firmly in denial-land.  It is not that these colours are not pretty in their way; it is just that they are definitely not “me”.  My friend Inge, not known for mincing words, saw me knitting it this weekend and said “Kelly, those colours are vile on you!”

The interesting and sad part of this story is that I originally ordered them over the internet because I believed that I would not have an opportunity to get into London to the yarn shop for a few weeks.  As chance would have it, I was in London on business a few days ago, and was able to make a very brief foray into Loop.  There, I saw a basket full of Sparrow linen, and I have to tell you that Sparrow comes in the most luscious, glorious shades.  I ended up buying six of them just because I couldn’t resist.

These colours are so spectacular!  I couldn’t believe it: I loved every colour but the three which I ordered!  Major colour fail!

I have decided to frog the Pimenton (perhaps to try again next summer), and I have not yet decided what to do with the six new shades.

In other colour news, just as I was leaving the house to rush into London, I received an email from Emma with a request for a sweater!  How serendipitous!  This was justification enough for a yarn-shopping detour in the city.  Emma wants me to knit her Tinder, a cardigan designed by Jared Flood of Brooklyn Tweed:

I have always liked this cardigan and am happy to knit it for her.  She asked for a mossy green.  They had three greens in Shelter (Brooklyn Tweed’s worsted weight yarn): Tent, which I deemed too blue; Artifact, which I thought was too gloomy, and Birdbook, which is very olive.  I bought the Birdbook, which is really an army green shade, but since it is tweed, has bits of brighter tones – blues and reds and yellows.  I whipped up a swatch last night, and am all good to go, but I can’t stop fretting about the colour.  I really want to make sure that it is exactly what Emma wants before I knit it up (daughters can be very exacting)! I took a photo of the swatch, which shows off both the ribbing and the pretty pattern stitch: here it is, Emma!

But, of course, a problem remains; in fact the very problem I stated at the start of this post. It is nigh impossible to guarantee the colour you see on your screen compares to the colour in real life.  So, I have come to the unfortunate conclusion that my best option is to send the swatch to Emma and let her make up her mind.

This means, sadly, that I am back where I started a week ago – with nothing on my needles!  Boo hoo.