I loved the two new books of patterns released by Brooklyn Tweed this fall.  I had quite a few of them on my radar, but my eyes kept being drawn back to Levenwick, an asymmetrical cardigan designed by Gudrun Johnston.  I like her design style, and the cardigan seemed right – fast, cute, suitable for the office, nice weight.  I ordered some Cascade Heather wool in 2433 (Pacifica, a teal with slightly more green than blue), and was off.

The knitting was fast and seemed to be progressing well.  I finished the body of the cardigan in under two weeks, and just had the sleeves and finishing to go.  I fully expected to be wearing this within a week.

And then it began….sleeve troubles.  I never have been one to enjoy knitting sleeves in the round.  Unlike nearly everyone else on Ravelry, I actually like to seam, and I’ve never knit a sock, so I don’t have much experience with DPNs.  And I realized once I began that I have never purled with DPNs.  Now I am not one of those knitters who dislikes purling; in fact, I have never found there to be much difference between knitting and purling in terms of ease or comfort levels or speed.  I discovered once I started the sleeves, however, that when I tried to purl on DPNs, I got terrible ladders at the point where the needles joined.  Nothing I tried seemed to help  (adjusting tension, pulling on the yarn, moving the joints around the needle, etc).

Clearly I needed another approach.  I spent an evening looking at youtube videos of various knitting in the round techniques (without the sound, as I was watching a movie with the kids at the same time – and I always tell them not to multitask!)  I decided to try the method using two circular needles, and though I gave it an honest go, I had no luck eliminating the ladders.  Finally, after knitting an entire sleeve, I ripped it all out, and stewed for days in annoyance.  My three week sweater was no longer.  (I should also mention, for those knitting Levenwick, that the sleeve was much too tight.  I planned to cut back on the decreases when reknitting.) 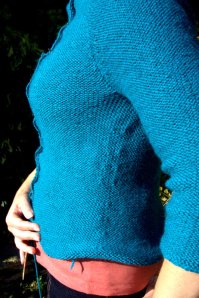 My next step was to learn the Magic Loop method.  This, in my opinion, was the best overall option, and helped reduce the ladders, but not entirely (plus the added benefit that there are now only two ladders instead of three or four around the circumference of the sleeve).  Unfortunately, I didn’t photograph the extremely frustrating and ladder-ridden sleeve the first time around, but here is a close up produced in the reknit sleeve using Magic Loop:

I am hopeful that these can be blocked out for a nice finish, and I am much happier with the fit of the sleeve, having started the decreases later, and making two less sets than called for. A very nice touch is the i-cord edging on the sleeves.  I don’t think I’ve done this before.  Gudrun’s instructions are very clear and the results are lovely.  You can see it on the right side in the photo above, but that doesn’t show it off well since the cardigan is knit in reverse stockinette stitch.  Below is a photo with the sleeve turned up to give a better look at the edging.  Now, on to the second sleeve!