I’ve written a lot of posts about the Tinder Cardigan that I have been knitting for Emma. Some of them funny, some of them frustrated, and many of them nit-picky.  But, I have to say, this cardigan is really worth the effort.

I fretted about the seaming, complained about the yarn, worried that it wouldn’t fit, dragged it around the world and back and then back again, had ridiculous conversations with Emma about whether and how to modify it, ripped out seams, blocked it TWICE, bought three different sets of buttons, knit it in four countries on three continents, and………

it is pretty much perfect in every way. 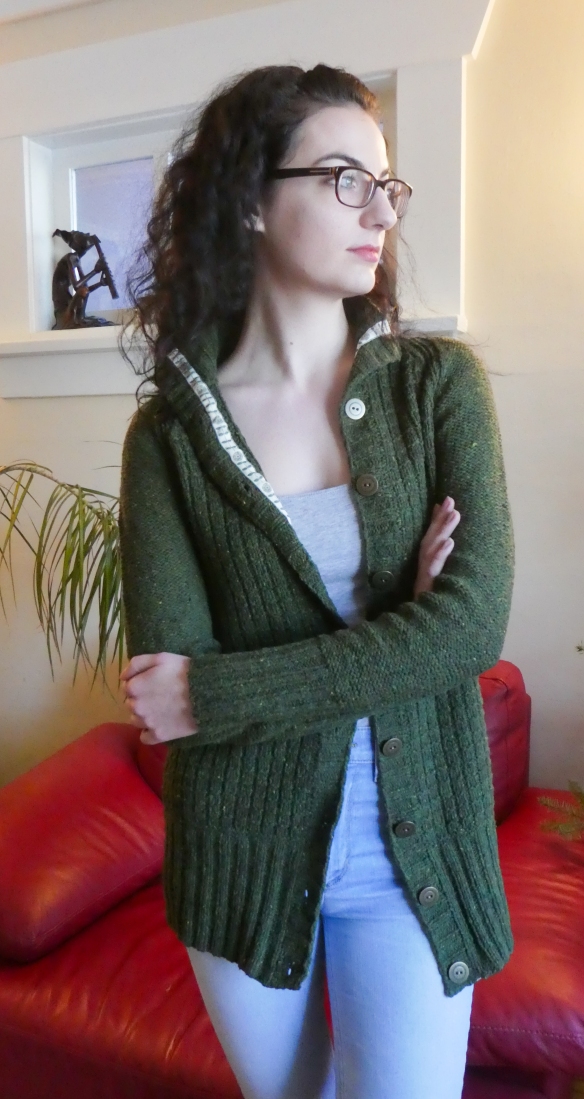 I will leave you to read through my earlier posts for in-depth details.  The cardigan was designed by the great Jared Flood for Brooklyn Tweed (the Ravelry link is here).  I used Shelter worsted weight yarn (also from Brooklyn Tweed) in the shade Birdbook. Despite the fact that it is not my favorite yarn to knit with (I don’t like the feel of it in my hands), once washed and blocked it really delivered!  It is so light and lofty and has one of the best tweed palettes anywhere. 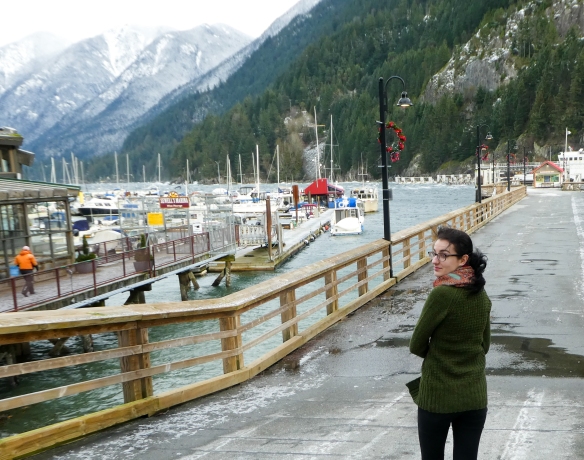 I knit it in a size 34 planning on an inch or two of ease; my gauge swatch lied a bit (that’s my story and I’m sticking to it) and it ended up being REALLY narrow.  I blocked it out twice in order to get more width, particularly in the collar and biceps.  It ended up with zero ease – not the look we were going for – but both Emma and I agreed that it looked fantastic this way.

I made very few modifications.  I knit it two inches longer than called for – both in body length and sleeve length.  I knit the ribbing for 6 inches (instead of the 4.5″ called for).  I put in more buttons (9 instead of 7), and they were also slightly larger than the pattern called for (1″ as opposed to 3/4″).   I found a beautiful ribbon which has a pattern in the very same shade of green, and I painstakingly sewed it over the pick-up seams on both the button and the button hole band.  My hope is that the ribbon will give the cardigan some stability over time and keep it from stretching out of shape.

I took the unfinished cardigan with me to Vancouver, where we were spending the holiday with our daughters.  While there, I knit the button bands, picked out buttons with Emma (at the funky shop Button Button), sewed on the buttons, and then, as said before (but it demands repeating) painstakingly sewed on the ribbon. 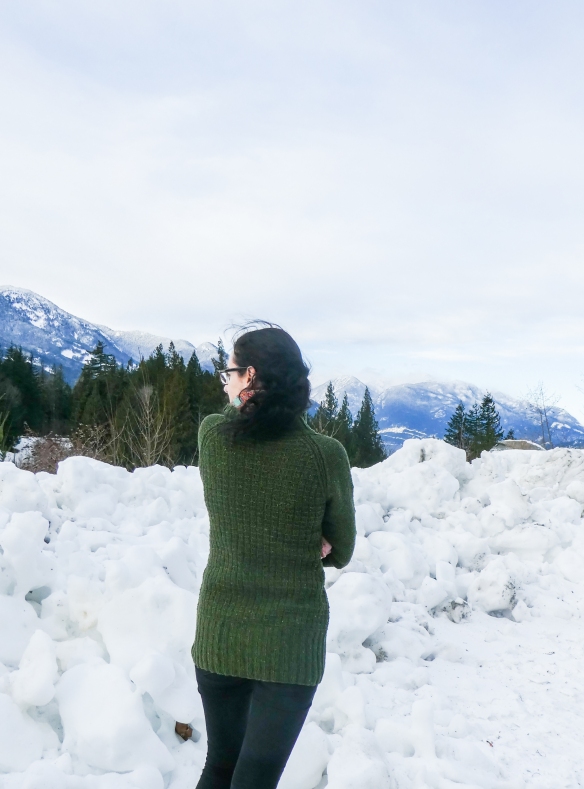 On New Year’s Day, we drove up the coast, first to Horseshoe Bay and then farther up towards Whistler.  The day was stunning with blue skies and fabulous scenery, but it was icy cold and extremely windy.  In fact, the road into Horseshoe Bay was covered with downed branches and we nearly drove under a tree just as it crashed onto the highway during the drive. As you might expect from our family, we made Emma get out of the car in the freezing cold and gale force winds – repeatedly – in order to photograph the sweater. The things we do for this blog!

On the photos we took during that drive, you may notice that the cardigan has no buttons or ribbon yet, thus compounding the child cruelty in making Emma pose in the cold and wind!  Once we headed back into Deep Cove, I sat by a roaring fire and started to sew.

As always, when Doug and I find ourselves in Vancouver, we head down to Deep Cove to take a photo of us on the spot where we were married.  Here we are, at the very spot, a mere 25 years (and a few months) later!

24 thoughts on “Pretty much perfect in every way”